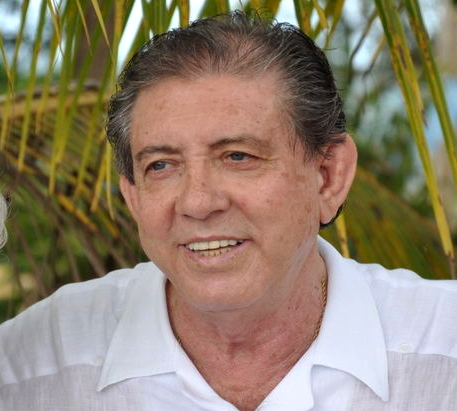 João de Deus or John of God, is a Brazilian spiritual healer. I heard of him last year, in October 2016, in a very unexpected way. I was studying online something about homeopathy, and navigating from one website to another, when I found an article titled “John of God”. I started reading it and realized that he was a Brazilian contemporary man, of whom I had never heard before.

As my origin country is Brazil, where I go once a year, I found it very odd to know about John of God in an American article. He started his healing journey unexpectedly, after having a vision of Santa Rita. She talked to him for a long time and instructed him to go to a spiritual temple, where they were waiting for him and even knew his name.

I started looking for more information in Brazilian websites, and I became amazed by his story and the place where he welcomes thousands of people – Casa Don Inácio de Loyola. I decided I would go there someday.

Brazil has always been a place where healing mediums are born. I was interested in them since I was a child, and I remember my wish to visit Chico Xavier who lived only 60km away from my town. I never went on  that trip, and he eventually passed away. Remembering that, I decided to visit John of God on my next trip to Brazil, that would happen four months later. I sent an article about him to my sister and brother in Brazil, inviting them to come along with me.

That same week I was giving a consultation to a patient, and at the end we started talking about other things, and he mentioned that he believed in spiritual healing and asked me if I believed in it too. I told him that with no doubt I believed it, and asked him if he had heard of John of God.  He told me that he used to visit the Casa Don Inácio three times a year. I was delighted by the synchronicity of this conversation. He warned me not to be disappointed because in general John stays only seconds with each person, although all receive what they need in order to achieve improvement. Not all cures are guaranteed or immediate, because they depend on many factors. In the Centre they are very clear about it, and no money is charged. When the entity suggests a herbal remedy, it is at an affordable price. Even the hotels nearby have an agreement with the Casa, and cannot charge high prices.

On the road to Abadiânia 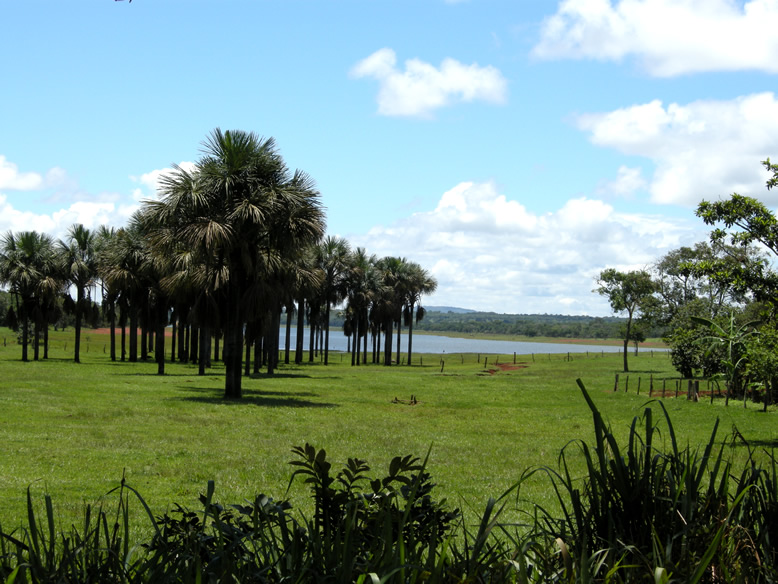 Finally, in March 2017, my husband, brother, sister and I took the road to Abadiânia, in the state of Goiás, where he lives –  a long drive of 1400 Km round trip to stay only one full day there, because we had a flight the next day. Our trip started a week before, at my family’s farm, which is my favourite place in the world. Next we stopped at my brother’s farm so we could rest for the next 500 km. It was a wonderful night in a magical place, where we the stars seem so close that we can almost touch them.

We arrived in Abadiânia at around 5pm, and went see the Casa, a beautiful place, surrounded by mountains. Everything is clean and well kept, and everyone is dressed in white, most clothes bought in the small shops nearby. Early the next day we went to the immense hall, and sat to listen to lectures and instructions while waiting for our time to meet John.

Waiting to see John of God

They asked us to pray and think about the problems we wanted to solve. John of God receives around 30 different spirits (which they call entities), including Don Inácio de Loyola, and usually nobody knows (except his close assistants) which spirit takes over his body each day. When they called my row, we went slowly, one after another, through many rooms. Each room had many people meditating, all with their eyes closed. Finally we arrived at a long and narrow room, lit with colourful lights inside big crystals. It was beautiful. The energy was strong and amazing. 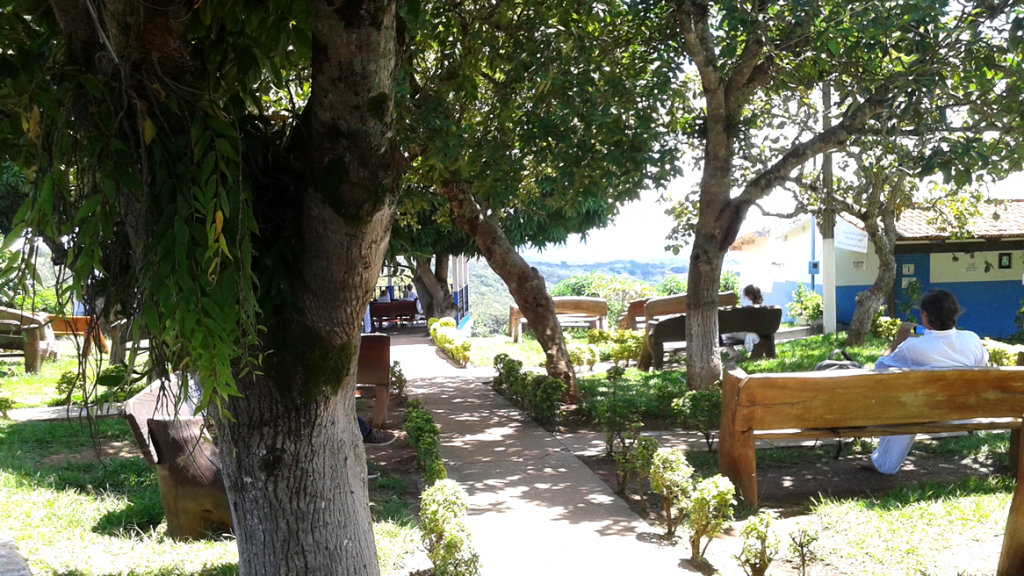 I was a little confused about how to behave. I just wanted to meet him, and had nothing in especial to ask for. My sister and brother needed help with health problems, but not me. I decided I would say nothing. When my turn was up, he took my hand (as he does with everybody) and did something unusual: he talked to me.

He asked where I lived and I said “in Canada”. He asked who I was with and I said “with my brother who has a knee problem, my sister and my husband”. Then he asked “what do you do?” and I told him I was a homeopath. Without thinking or planning, I completed saying that in fact I wanted to be a healing person (in Portuguese benzedeira) since I was a child, and that I wanted to heal with energy and color. His answer was brief but amazing!!! Next, without giving me time to say anything, he gave me a book as a gift and told me to sit down, close my eyes and participate of the meditation group.

I hesitated for a second, and his assistant came quickly and told me to find a seat,  to close my eyes and help by focusing on the healing energy. I don’t know how long I stayed there, two hours maybe, until the last person passed by João de Deus.

It took me a while to process everything that had happened, and I am still deepening my meditations to develop and achieve new levels of understanding and consciousness. What I know for sure is that my encounter with João and the spirit that spoke through him that day, was a milestone in my life. I found an inner sense of confidence that I am on the right path, as if each piece of an apparently chaotic puzzle is taking shape, and forming something beautiful.

After my trip I read that the Casa Don Inácio de Loyola is visited by all kinds of people, including politicians, movie stars and physicians. That doesn’t impress me, but I found it interesting that Oprah Winfrey went there, because people usually go to her, and she took a long trip to meet John of God instead.

Healing can be a process that takes time

Many people get completely cured for all kinds of diseases. It is not rare that someone in a wheelchair, with a diagnostic that the problem is incurable, goes home walking. In serious cases, it usually takes time to get results, and some people need to stay longer in Abadiânia, or come back at intervals. Some never get cured of the disease, but usually get better emotionally and spiritually.

Some critics of Jonh of God who never went to his Centre say that when people go there, they stop taking their medications and get worse. That is not true! João and his assistants instruct everyone to continue with their remedies and health advisers. Obviously, if they get cured they stop taking remedies, and don’t need medical survaillance for that problem anymore.

I read in a blog, a text full of indignation, because two people passed way at the Casa. What is the problem? People die anywhere. There is no healer or physician capable of stopping death, if a person’s time has come. The Casa is not in the desert – it is in a city where there are hospitals, and everything is close. Among the 500 people that visit it everyday, there is bound to be a doctor to help.

On the other hand, we could ask that blogger how many people die in hospitals every single day? That should be forbidden! How could the doctors and nurses allow those deaths to happen?

I think we need to have common sense, and respect those who look for spiritual healing. Firstly they go because they want to! They go because they lost their hope, they take remedies that don’t cure and create new diseases, and they have the right to try to find other possibilities. Energy healing has been witnessed for centuries, and fortunately we are free to choose.

Scholars try to understand how these cures happen. Some of them have their lives changed and are amazed by it. Others say they are fake. What is, in fact, a spiritual healing? Is it a force inside ourselves that we are not aware of, that is activated by the entity? Or is it a spiritual energy channeled by the entity? When people ask João that, he simply answers: “It is God”. The truth is that our science doesn’t have all the answers, and the skeptics judge without taking the time to experience or try to know better.

I believe that our limited knowledge of the universe should makes us humble to accept that there are forces that our rudimentary instruments cannot measure. When someone says “they are only cured because they have faith” this person is underestimating the power of belief, the power that is capable of changing unpleasant situations into better ones, transforming disease in health, and suffering and pain into happiness. We still need our physicians and remedies (preferably the homeopathic ones), but we should not discredit our spiritual powers only because we don’t understand them well. 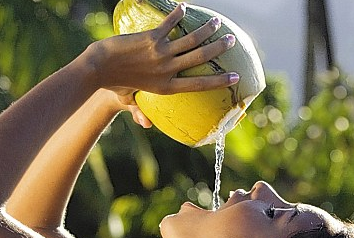 I would like to finalize, and take this opportunity to thank João and the spiritual beings who help, one way or another,  all who go there looking for some kind of relief. I’m also very grateful to my journey companions – Vinny, Sebastiao and Madalena – for taking this spiritual quest with me. Among laughs, good food, arguments over speeding, and stopping to drink coconut water, it was great being with you all! Thank you!

We are temporarily halting our Online Sales while we re-structure the site. Sorry for the inconvenience! Dismiss